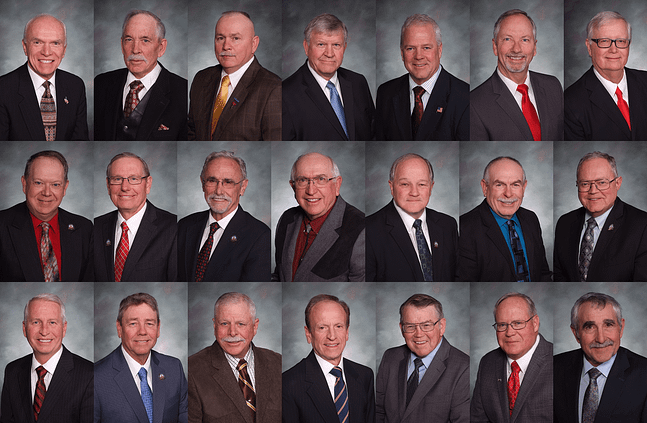 Perhaps not all of these old men in the House voted against providing funding for childcare—there wasn't a roll call vote—but most of them did.

A proposed amendment to the Wyoming Legislature’s in-house budget would have provided funding to reimburse lawmakers for some of their childcare costs.

The small funding bump would have helped reduce a major barrier that prevents working parents from running for state office in Wyoming. 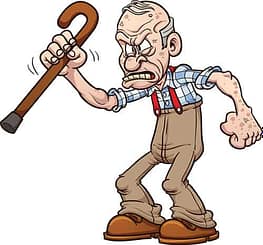 But faster than you can yell, “Kids, get off my lawn!” the amendment drew panicked opposition from a contingent of old fogeys who claimed it discriminated against them. After about 20 minutes of debate on Wednesday, they killed the proposal.

Rep. Bill Haley (R-Centennial) said that the burden of caring for children shouldn’t be privileged over the hardships ranchers face having to care for their cows.

“At the risk of sounding just like an old ogre, I’d like to bring up that we’ve all got expenses,” Haley said. “I pay those expenses out of the salary I get here. I’ve got to take care of livestock, plow roads, and we’ve got ranchers in here who have to hire additional help.”

This is the governing logic that guides our state “leaders.”

Hardly a colored-haired head in the House

The amendment to Senate File 02 – Legislative Budget would have given the Legislature’s Management Council the authority to enact a policy to reimburse lawmakers for a portion of their childcare expenses for dependents under 12. The expenses could be incurred either during the legislative session or at interim committee meetings across the state.

“At the risk of sounding just like an old ogre, I’d like to bring up that we’ve all got expenses.”

The reimbursable amount would be no more than $500 per quarter. It wasn’t a budget-buster.

Rep. Charles Pelkey (D-Laramie) acknowledged it costs a lot for people, including himself, to serve in the Legislature. But he pointed out there are few young mothers in the Legislature, and one of the primary reasons is because childcare is often one of a household’s highest costs.

As a result, many women just can’t afford to run for office.

Rep. Sara Burlingame (D-Cheyenne) said some male legislators who travel long distances to the capital must leave young children at home. But the only two Wyoming lawmakers who are female and in the same boat are Sen. Affie Ellis (R-Cheyenne) and herself, both of whom get to go home each night during the session.

“If we’re serious about doing something about Wyoming being number 50 in the country for having women serve, this is a great place to start,” Burlingame said.

Rep. Landon Brown (R-Cheyenne) pointed out that childcare costs have a direct impact on the Legislature’s being made up mostly of old people.

“If we’re serious about doing something about Wyoming being number 50 in the country for having women serve, this is a great place to start.”

“I had somebody come in and count the number of colored-hair heads that were in our chambers,” Brown said. “They reported back to me and said, ‘Man, there are like seven people with non-white hair. Do you realize that?’

“When you’re trying to diversify and get people here, this is one way to do it,” Brown added.

But the grayhairs mobilized and used their supermajority clout to strike back at the House’s younger contingent.

“Depending upon where you live, childcare can be at least $1,200 a month for one child. So please be respectful when you’re talking about everyone can afford it.”

“When we ran for this [office] we knew we weren’t going to make a lot of money,” said Rep. Bill Pownall (R-Gillette). “This is a citizen’s legislative body. We didn’t want to come down here to make money.”

Pownall said House members make $259 per day, which is meant to cover lodging, travel, food, insurance, vehicle maintenance, and whatever other costs they incur. “I think out of that amount, you can pay childcare. We keep adding a little here, a little there, but we never deduct anything. Folks who want to come down here will make it happen.”

Rep. Roy Edwards (R-Gillette) objected to the amendment because he claimed it treats men and women legislators differently.

“All of us make our sacrifices when we come down here,” he said. “When I’m down here my tire shop sits idle. I am my tire shop, so I don’t make any money. If my wife came down here and we had child, I would take care of my own kids. I wouldn’t put them out for somebody else to take care of.”

In response, Rep. Shelly Duncan (R-Lingle) couldn’t get to the microphone fast enough.

“Depending upon where you live, childcare can be at least $1,200 a month for one child. So please be respectful when you’re talking about everyone can afford it,” she said. “It’s an incredible expense. So, let’s have a little reality, please.”

House Minority Floor Leader Cathy Connolly (D-Laramie) said the amendment isn’t about lawmakers’ expenses, but about having a legislative body “that would look a little different than what we have, and a little more like our state.”

No, many of the old guys don’t share that view at all. During the voice vote a few seconds later, a loud male majority shouted “No,” killing the amendment and leaving things just the way they are.

Which is, of course, exactly the way they like it.