Wyoming towns and counties rely on state funds to help pay for local services. But state funds are drying up.

The Wyoming Legislature once again refused to raise significant forms of new revenue to replace the hundreds of millions of dollars lost in recent years as a result of declining mineral industries.

The state’s budget shortfall remains in the hundreds of millions of dollars per year after the 2020 legislative session. Lawmakers have again chosen to close the gap by spending down the state’s savings.

But lawmakers did manage to pass a bill that allows local governments to more easily raise money on their own, in the form of additional sales tax.

It’s as though a family’s main breadwinner lost his job and refuses to get another one, but he’s given permission to his children to cut lawns for spending cash.

The measure is at least a nod toward diversifying Wyoming’s tax structure away from mineral tax dependence. But because it relies on regressive sales tax, the new revenue comes at just about the highest cost possible to low-income Wyomingites.

The passage of House Bill 47, which was passed by the Legislature last week, will make it easier for local communities to tax themselves in a few ways.

First, it will increase the total potential rate at which local sales tax can be levied. Second, it will lower the threshold of how many local governments in a county must agree to put additional countywide tax on the ballot. And third, it will allow city governments—independent of counties—to implement a limited-use municipal tax.

Supporters of HB-47, which was sponsored by the Joint Revenue Committee, said the measure is needed so municipalities can raise necessary funds without having to ask other cities and towns in their county for permission.

But opponents said the bill, mainly in the Senate, accused the Revenue Committee of crafting a measure that results in higher taxes for Wyoming residents, while sparing the Legislature of getting its hands dirty raising statewide taxes itself.

Coming to your county: General use “sixth penny” sales tax 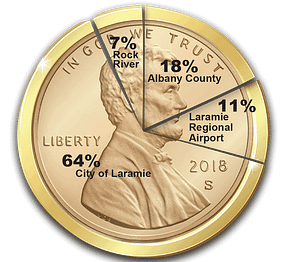 How Albany County divvies up its “sixth penny” tax

The state currently imposes a blanket 4-cent sales tax on each dollar spent in Wyoming. Meanwhile, voters of each county have for years been allowed to approve an additional 2 cents in sales tax—a “fifth penny” sales tax for general operations in the county, and a “sixth penny” tax that must be put toward some specific project, such as a new community college building or library.

Now, HB-47 will allow counties to vote to implement “sixth penny” sales tax to generate funds for general use, rather than just specific projects.

Proponents of the bill pointed out that local governments currently rely on funding from the state, and as the state collects less mineral tax revenue, it will be able to pass on less funding down to local governments.

In recent years the Legislature has appropriated $105 million annually to supplement the budgets of cities, towns, and counties. This is about half of what local governments received from the state before the energy industries went bust in 2015.

“This is an immense tool for our local governments. They’re facing the same budget problems we are.”

Senate President Drew Perkins (R-Casper) warned that the state providing even this lesser amount will not sustainable going forward.

“That’s going to have to go away one of these days, probably very soon,” he said.

Sen. Cale Case (R-Riverton) agreed. “This is an immense tool for our local governments. They’re facing the same [budget problems] that we are.”

One obstacle that communities have faced in trying to pass local sales taxes is that, prior to HB-47, two-thirds of local governments in any county had to approve of the tax proposal before it appeared on the ballot.

“Local government,” in this case, means the county commission and any city councils.

As a result of this two-thirds threshold, when a town proposes a project that would require “sixth penny” tax funding, its leaders must convince county officials and the other town councils to get on board. If they don’t, the project—or at least the “sixth penny” funding—is squashed.

HB-47 lowers the threshold of local governments that must agree to put an extra countywide tax on the ballot, from two-thirds to one-half. Proponents said the change was necessary to keep smaller cities and towns from having too much control over whether larger municipalities can raise sales taxes.

The Cheyenne Greenway is funded by “sixth penny” tax

HB-47 had the support of both the Wyoming Association of Municipalities (WAM) and the Wyoming County Commissioners Association. The groups have been working for several years to help craft a local tax proposal they could both endorse.

WAM officials have long argued that municipalities should be able to raise sales tax revenues independent of other local governments, and that’s exactly what another aspect of the bill does.

On top of the “fifth” and “sixth penny” countywide taxes, city councils will now be able to raise a “seventh penny” that comes from—an is applied to—municipalities without asking the permission of county officials or other towns.

Senate President Perkins said giving voters the option to approve a “seventh penny” municipal sales tax will let them directly decide if they want to pay more in taxes or have services cut when the state can no longer afford to pay for them.

Not all lawmakers were in favor of giving communities local control over taxation.

Sen. Bo Biteman (R-Ranchester), said his constituents are tired of “constantly facing tax increases.” He claimed tax proponents keep coming back to voters, who “eventually get worn down” and pass an increase.

Sen. Charlie Scott (R-Casper), who also opposed HB-47, said now is not the time to pass a seventh penny municipal sales tax. Each smaller tax increase Wyomingites face, he said, will make it more difficult for the Legislature to pass more substantial measures to actually address the state’s budget shortfall.

“We’re having difficulty with other measures, and it looks like our reserves are not going to outlast the current downturn in our minerals revenue,” Scott said. “The last time we got in this kind of trouble we ran out of all our reserves and we had to do a fourth cent on sales tax.”

Scott said allowing cities to impose a “seventh penny” will come back to haunt the Legislature, because lawmakers won’t have the support to pass another 1-cent state sales tax increase if one is needed.

“If we go with this, when we have communities around the state going to 7 cents, how difficult will it be when we need to balance the state budget?” he asked. “There are other options—we could do an income tax. I think that would be a disaster.”

In reality, Scott’s argument is backwards in terms of tax fairness. Unlike income taxes, which require people who make more money to pay higher tax rates, sales taxes are regressive—everyone is taxed the same rate regardless of their income.

Sales taxes place a higher tax burden on those with lower incomes, who pay a much higher percentage of their earnings in sales taxes compared to wealthier residents.

Because Wyoming relies on a statewide sales tax—rather than income tax—to fund the portion of its budget not covered by mineral taxes, it has one of the worst gaps in the nation between the state taxes poor people pay and what rich folks do.

Governor Gordon can and should stop COVID-related evictions in Wyoming
Scroll to top
Share this ArticleLike this article? Email it to a friend!
Email sent!