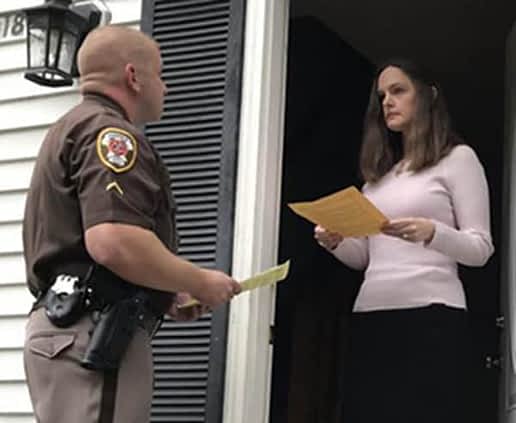 Gov. Gordon can direct the state attorney general to order sheriff's offices not to execute evictions.

As unemployment spikes in Wyoming during the COVID-19 outbreak, workers who are suddenly jobless face the threat of losing their housing as well.

Nationally, dozens of places have enacted measures to protect workers from eviction who become unemployed or who have their hours cut because of the coronavirus.

Wyoming isn’t one of them.

Federal protections under the recently passed CARES Act forbid evictions from properties that have certain types of mortgages. But other homeowners and renters enjoy no such federal protections.

Wyoming Governor Mark Gordon has the power to halt COVID-related evictions in the state altogether.

Evictions are ordered by courts and carried out by county sheriff departments, which are under the jurisdiction of the state attorney general’s office.

Gordon could immediately direct the state attorney general to order county sheriff offices to stop COVID-related evictions during the crisis. And he should.

While additional assistance for out-of-work Wyomingites will be required in the long term to prevent a wide variety of hardships, an eviction moratorium would be positive short-term step.

Gordon took to Twitter last week to address residents’ concerns about eviction. But his comments were not reassuring.[/fusion_text][fusion_code]PGJsb2NrcXVvdGUgY2xhc3M9InR3aXR0ZXItdHdlZXQgdHctYWxpZ24tY2VudGVyIj48cCBsYW5nPSJlbiIgZGlyPSJsdHIiPkkgaGF2ZSBiZWVuIGNvbnRhY3RlZCBieSBtYW55IGNvbnN0aXR1ZW50cyB3aG8gYXJlIGNvbmNlcm5lZCB0aGF0IHRoZXkgbWF5IGJlIGZhY2luZyBldmljdGlvbiBwcm9jZWVkaW5ncyBhcyB0aGUgZW5kIG9mIHRoZSBtb250aCBhcHByb2FjaGVzLiBJIHVyZ2Ugb3VyIHN0YXRl4oCZcyBsYW5kbG9yZHMgdG8gZXhlcmNpc2UgbWF4aW11bSBmbGV4aWJpbGl0eSB3aXRoIHlvdXIgdGVuYW50cyB3aGVuIGl0IGNvbWVzIHRvIHJlbnQgcGF5bWVudHMuPC9wPuKAlCBHb3Zlcm5vciBNYXJrIEdvcmRvbiAoQEdvdmVybm9yR29yZG9uKSA8YSBocmVmPSJodHRwczovL3R3aXR0ZXIuY29tL0dvdmVybm9yR29yZG9uL3N0YXR1cy8xMjQyOTk2MjU1NTI3MDU5NDU2P3JlZl9zcmM9dHdzcmMlNUV0ZnciPk1hcmNoIDI2LCAyMDIwPC9hPjwvYmxvY2txdW90ZT4gPHNjcmlwdCBhc3luYyBzcmM9Imh0dHBzOi8vcGxhdGZvcm0udHdpdHRlci5jb20vd2lkZ2V0cy5qcyIgY2hhcnNldD0idXRmLTgiPjwvc2NyaXB0PiA=[/fusion_code][fusion_text]“I urge the state’s landlords to exercise maximum flexibility with your tenants when it comes to rent payments,” he wrote. “Now is not the time to be evicting individuals who may have recently become unemployed.”

We’re not sure whether Gordon has ever been a renter before, but he should know that encouraging landlords to be nice doesn’t always work out. And it certainly doesn’t count as decisive action by an elected official who has the power to do far more in a time of crisis.

Unemployment claims in Wyoming during the second week of March showed that 2,339 residents are newly out of work.

That’s a 350 percent increase from what the state has been averaging (about 500 claims a week).

A spokesperson for the Wyoming Department of Workforce Services told WyoFile that those figures don’t show “the total picture,” since self-employed and gig workers, among others, are unaccounted for.

And Wyoming’s employment and housing situations are likely to get worse. During the same time period, neighboring Montana and Nebraska saw their unemployment claims rise 18- and 20-fold, respectively.

Since no one knows how many people actually have the coronavirus in Wyoming, and since the state has declined to issue strict orders to slow its spread, it’s not hard to imagine that further hardships await state residents in housing, employment, and in general.

Federal protections and their shortcomings

The COVID-19 relief package passed by U.S. Congress—the CARES Act—forbids evictions from properties with federally backed mortgages from March 27 – July 24. The law also provides homeowners with these types of mortgages some payment relief.

This is a positive development and covers many properties. But it by no means protects all renters or homeowners in Wyoming.

Nationally, the CARES Act applies to roughly 30 million homes and their residents. But another 40 million renters live in homes that aren’t covered. A breakdown of these figures for Wyoming doesn’t exist, but it’s safe to say there are lots of vulnerable people who aren’t federally protected.

For these people, a moratorium on evictions from Governor Gordon would amount to huge relief.

A state at risk

A lack of affordable housing in Wyoming and the outsized impact of the coronavirus pandemic on service industry workers makes the problem even more acute.

The National Low-Income Housing Coalition reports that more than 17,000 households in Wyoming are “extremely low income,” which means that a family of four is surviving on less than $25,000 per year. For these people, any drop in income could mean an inability to make rent.

Many people in this category in other states might live in federally subsidized housing and would therefore enjoy protection from evictions under the CARES Act. But Wyoming lacks affordable housing of all sorts, subsidized or otherwise, meaning that a higher percentage of our population is vulnerable.

Even people who aren’t “extremely low income” are at risk of eviction if their jobs simply cease to exist.

And even people who aren’t “extremely low income” are at risk of eviction if their jobs simply cease to exist during the crisis.

A report by the Economic Policy Institute projects a total loss of more than 26,000 jobs in Wyoming by summer.

State public health orders and travel restrictions have directly impacted the leisure and hospitality industry, in particular. Servers, bartenders, and hotel staff are facing widespread layoffs and decreased hours, squeezing their budgets and threatening their ability to make rent or mortgage payments alongside other necessary purchases.

While job loss projections in the travel and tourism industry aren’t available yet, Chris Brown, executive director of the Wyoming Lodging and Restaurant Association, told the Casper Star-Tribune last week that “the numbers are likely to be staggering.”

State and local governments across the nation have already established eviction protections beyond the CARES Act, and Wyoming should follow suit.

Washington State has issued a blanket moratorium on evictions, as have states like Arizona and Wisconsin, while court orders in Idaho, Utah, and Texas are serving the same purpose. In Denver, sheriff’s deputies who would normally execute evictions have been redeployed to other tasks.

Some Wyoming banks and lenders have taken it upon themselves to offer relief to mortgage holders. The small-town approach of local financial institutions has allowed lenders to work with borrowers to make arrangements.

But this is far from universal. Meanwhile, many renters live in units owned by distant real estate companies, where tenants only interact with property managers. These middlemen typically don’t have the leeway to waive fees or renegotiate payment plans—they take their orders from the property owners and follow them.

If the directive comes down to a property manager to evict someone for nonpayment because of COVID-19, tenants would have little recourse.

That is, unless Governor Gordon does the right thing and steps in himself.

Already behind, Wyoming women hit hard by COVID crisis
Scroll to top
Share this ArticleLike this article? Email it to a friend!
Email sent!