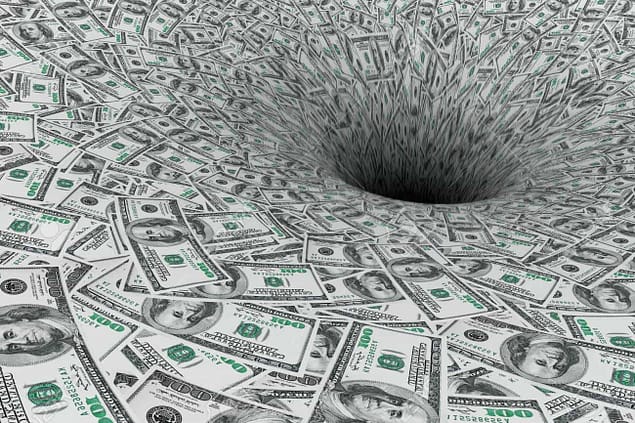 National corporations suck money out of Wyoming communities. A proposed corporate income tax would capture a small slice of corporate profits for Wyoming schools while sparing Mom and Pop shops. 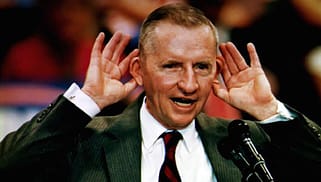 The billionaire and two-time presidential candidate famously remarked that the United States’ trade agreement with Mexico created “a giant sucking sound of jobs being pulled out of this country.”

Obermueller told the committee that he hears a similar sucking sound in Wyoming today—but it’s cash, not jobs, being siphoned from the state’s economy.

“The global markets have taken hold in Wyoming,” he said. “Global markets follow profits … That sucking sound you hear is our capital leaving our state of Wyoming.”

“That sucking sound you hear is our capital leaving our state of Wyoming.”

Obermueller was referring to the trend of huge corporations replacing locally owned businesses in Wyoming and sending their profits out of state—to CEOs, shareholders, and corporate headquarters.

Meanwhile, Wyoming is one of only two states in the nation that has no mechanism to tax corporate profits and keep a portion of them to fund roads, schools, and other public services and infrastructure.

To change this situation—at a time when the coal industry plummets and Wyoming faces a dire revenue outlook—Obermueller came up with a way to stop some of those corporate profits from being sucked away: The National Corporate Tax Recapture Act.

A new take on the “big box tax”

Earlier this year, during the 2019 Legislative session, Obermueller sponsored a bill to tax the profits of some large corporations doing business in Wyoming.

The “National Retail Fairness Act” would have imposed a 7 percent tax on corporate profits in the retail, hospitality, and food service sectors. It was dubbed the “big box tax” because it targeted companies like Applebee’s and Walmart while sparing any company with fewer than 100 shareholders.

The “big box tax” had the support of the Republican leadership in both chambers of the Legislature. It passed the House by a 44 – 14 vote but was never heard in the Senate. It died after Senate Corporations Committee Chairman Bill Landen, also a Casper Republican, said it didn’t have the votes to pass the full chamber.

Last week, Obermueller asked the Revenue Committee to sponsor a revised version of this bill. The National Corporate Tax Recapture Act also targets huge businesses while sparing Mom and Pop shops. But it broadens the types of huge businesses whose profits would be taxed.

The committee agreed, by an 8 – 5 vote, to consider sponsoring the bill at its next meeting in September.

The “big box tax” was limited to large retail stores, restaurants, and hotels with more than 100 shareholders. Its critics argued that it was unfairly narrow and “picked winners and losers.”

Corporations doing business in Wyoming require roads, police, firefighters, and clean water. But they don’t chip in to help support these public services.

Obermueller’s new Corporate Profit Recapture bill is broader—it would affect all types of 100-plus-shareholder corporations with branches in Wyoming.

Regardless of their sector, multinational corporations doing business in Wyoming all have a few things in common. They require things like roads, police, firefighters, and clean water to operate. But they send their profits out of state without chipping in to help support these critical public services and infrastructure.

Obermueller told the Revenue Committee that Wyoming’s lack of a corporate income tax makes the state defenseless against corporations whose business models involve taking all they can while giving as little back as possible.

“Our ability to regulate and tax is our only refuge and defense,” Obermueller said. “If we legislators can’t buck up and handle the global economy, what good are we to the folks we represent?

“If you vote no,” he added, “please tell us who should pay for the state services that global markets demand.”

Revenue Committee members in the Elk Room of the Wyoming Game & Fish HQ in Cheyenne.

While Obermueller’s proposed tax rate is 7 percent, the “effective tax rate”—the rate corporations actually pay—would be lower. That’s because a provision in the Wyoming state constitution grants a credit for property and sales tax in the event that the state ever establishes an income tax. Wyoming does not tax the incomes of individuals or corporations.

Obermueller said he picked 7 percent because it’s an average of other corporate income taxes in the nation. Even at that lower rate with the credits, Obermueller said his bill is designed to give small businesses “just a tiny edge” since they would be exempt from paying a tax that would impact larger corporations.

“That’s a reasonable outcome and good tax policy,” he said.

The proposal also credits severance and ad valorem taxes, which would effectively exempt the mineral industries from further taxation, since they already cover the lion’s share of Wyoming’s costs.

Tens of millions for Wyoming schools

Like the “big box tax,” all revenue raised by the Corporate Profit Recapture proposal would go toward funding public education.

Obermueller explained that he picked education funding because it was the “biggest target” in Wyoming’s deficit. In March, Wyoming’s education deficit was $371 million, out of a $479 million overall shortfall.

“If you vote no, please tell us who should pay for the state services that global markets demand.”

Wyoming’s constitution explicitly states that the legislature must levy taxes to fund public education, a position that the state supreme court has repeatedly upheld.

During the 2019 session, Wyoming Department of Revenue Director Dan Noble estimated that Obermueller’s “big box tax” would raise roughly $45 million a year for Wyoming schools. He said that his was a conservative estimate, and that it could generate more.

Last week, Noble told the Revenue Committee that Wyoming could expect more revenue from this new proposed tax, although he hadn’t figured out exact figures. He said that Nebraska’s corporate income tax, at 7.8 percent, generates $258 million per year from corporations with more than 100 shareholders.

Critics of the proposal worried that corporations in Wyoming would pass the cost of the tax back to consumers in the form of higher prices. But, Obermueller pointed out, if this did happen, Wyoming consumers would not bear this burden alone.

National corporations operate according to national pricing models, and any cost blowback would be distributed across the entire United States. For this very reason, Wyoming consumers already pay to offset the costs of corporate taxes levied by other states, without any benefit.

“It’s a distribution of all costs back to every customer,” Obermueller said. “All of their taxes and everything else goes into a bucket and is spread by uniform pricing across the nation.”

He called the proposed tax “a little slice of their national income.”

Bobby Ralston, vice president of the Wyoming Taxpayers Association, said his membership will need to review the new bill before it decides whether to support or oppose it. The organization opposed the National Retail Fairness Act.

“It still appears to pick some winners and losers and we would certainly have a problem supporting that. … But it’s a start,” Ralston said.

Several other corporate lobbyists, along with a representative from the conservative Tax Foundation, spoke against the proposal.

Lindsay Hanlon, a Cheyenne resident, testified in favor of the corporate income tax because it will be devoted to education. She said her Wyoming education has served her well, helping her successfully complete a graduate program at Boson College after going to the University of Wyoming.

“I don’t think the current crop of Wyoming students are going to be able to say this,” she said. “The education budget has been cut until it hurts, and then it’s been cut some more.”

She added that class sizes have expanded, teachers have left the state, and UW programs have been cut entirely or combined, “All in the name of saving money.”

“By favoring austerity measures over additional forms of taxation, we are telling our children that we don’t care if their teachers are overworked and underpaid,” Hanlon said. “We are telling our students that their future matters less than the pockets of corporations, and we’re telling them that we’d rather have their education suffer than change our ways.”