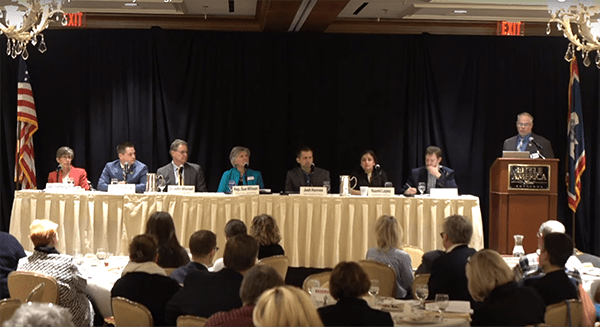 No one who doesn't have healthcare access was asked to participate.

The right-wing Wyoming Liberty Group has long lobbied against Medicaid expansion, so Better Wyoming was naturally skeptical when the organization announced it would be hosting a panel discussion on the issue.

It was advertised as an event that would allow people to “hear both sides of the issue.”

That’s like Planned Parenthood saying it’s going to host a panel to explore both sides of the abortion issue, or the NRA organizing a discussion that would give us both sides of the gun control debate—any thinking person would understand that it’s not going to be an objective view of the topic. 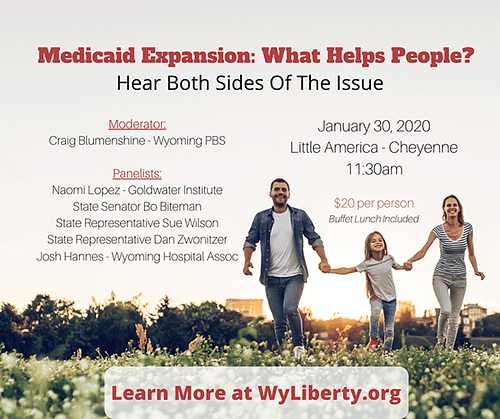 A day before the Cheyenne forum, the Wyoming Liberty Group declared that the $20-per-head event was “sold out.” Better Wyoming had yet to buy tickets, so we were forced to sneak in. Weirdly, many of the banquet hall seats were empty.

We didn’t feel bad about not paying. The Wyoming Liberty Group’s funder, Susan Gore, has more money than she could spend in 50 lifetimes, and she’s so greedy she once legally adopted her ex-husband as her “child” to secure a bigger portion of her family inheritance.

For half of the event, “free” was the right price anyway.

How the Wyoming Liberty Group normally talks about Medicaid expansion.

The audience saw a sharp contrast between panelists’ stances: Three who favor Medicaid expansion presented facts about why it would benefit low-income residents, reduce uncompensated care at hospitals that drive up the cost of services and insurance, and improve the state’s economy.

The seventh panelist, Rep. Sue Wilson (R-Cheyenne), once sponsored a Medicaid expansion bill. But she now says she can’t support it unless the Legislature identifies a specific way for the state to pay for the 10 percent of the cost that would be Wyoming’s responsibility.

Medicaid expansion is a sound investment

Rep. Dan Zwonitzer (R-Cheyenne), co-chairman of the Joint Revenue Committee, pointed out that Wyoming should pay its portion to expand Medicaid because it would be an investment that benefits the state in the long run.

“States have seen that they have better healthcare outcomes and improved access to care. Their budgets see savings, state revenues see gains, and states receive economic growth through increased workforce, reductions in poverty, and taking care of moms and their babies.”

“If we can get a low-income population in our state access to better care, it will save us tens of millions of dollars later on,” said the eight-term legislator, “I believe we should pass Medicaid expansion at this point.”

Hannes explained that, currently, Wyoming splits the cost of Medicaid 50-50 with the federal government. But the feds would cover 90 percent of Medicaid costs if Wyoming expanded the program.

A “sold out” ballroom

“Wyoming already has Medicaid waiver programs,” Hannes said. “There’s an opportunity to move people in those existing programs into the Medicaid expansion group.”

Jan Cartwright, Wyoming Primary Care Association executive director, pointed out that none of the 36 states that have expanded the program have withdrawn, and most have few regrets.

“States have seen that they have better healthcare outcomes and improved access to care,” Cartwright said. “State budgets see savings, state revenues see gains, and states receive economic growth through increased workforce, reductions in poverty, and taking care of moms and their babies.”

State Sen. Bo Biteman (R-Ranchester) was firmly on the “con” side, and he had the folksy catchphrases to prove it.

Biteman claimed Medicaid expansion amounts to “doubling down on more government.” Under his simplistic approach, all Wyoming needs to do is “get government out of healthcare” and free market “competition” will take care of the rest.

Biteman failed to note that Wyoming’s small population and pool of potential insurance customers has historically failed to attract private out-of-state insurers, and it’s unclear why that would change.

Meanwhile, Wyoming is the only state with a growing uninsured population.

Panelist Dr. John Mansell, a Gillette anesthesiologist and WMS member, said he wants to come to Wyoming’s rescue before it makes the grave mistake of expanding Medicaid.

“I feel like I need to grab the Legislature and say, ‘You’re about to step in front of a car,’” he said.

Mansell bizarrely claimed that people are already flocking to Gillette from across the nation for “medical tourism,” and that expanding Medicaid would make things worse.

He didn’t mention that Wyoming’s healthcare costs are higher than other places, and our overall healthcare ranks poorly, which doesn’t exactly make it seem like an attractive place to travel for healthcare.

“In Campbell County we’ve had many discussions about our patients from Sacramento, San Diego, the Bronx, Brooklyn, Atlanta,” Mansell said. “They move here in large part because of the access to health care. They live on a dependency check, and their money goes a lot further here.”

He said this flood of deadbeats would increase under Medicaid expansion.

As part of the Wyoming Liberty Group’s efforts to skew the conversation, it flew in a “policy expert” whose job is literally to go around the country and argue against Medicaid expansion.

No out-of-state Medicaid expansion proponent received an invite from the Liberty Group, much less a plane ticket.

Naomi Lopez, director of healthcare policy at the Phoenix-based Goldwater Institute, described herself as a healthcare policy expert. But the former ALEC staffer apparently didn’t do much research about Wyoming.

Lopez referenced big-state boogeymen like New York, which she said has “doubled or tripled” its Medicaid population (who’s counting?) because people dropped their private health insurance.

In reality, Wyoming’s most vulnerable population is the working poor, who thanks to the Legislature are caught in the “Medicaid gap.” They don’t meet income guidelines to receive healthcare access under current Medicaid guidelines, and their crappy jobs can’t afford them insurance via the Affordable Care Act’s Marketplace.

They would finally receive health insurance under Medicaid expansion.

Lopez said that these people, however, would not receive the treatment they “prefer” under expanded Medicaid, so it was better to just leave them completely without.

“The problem with Medicaid expansion is that the rules that bind you to the program make it very difficult to actually deliver care to the people in a way that would best meet their needs and preferences,” Lopez said.

“If the federal government was just providing money to provide healthcare, you could do a lot of fantastic things. But that’s not what this program is. It has a lot of rules and red tape that siphon off those dollars and don’t actually reach the patient.”

Perhaps that was the effect the Wyoming Liberty Group wanted. In the end, though, all three were shoveling horse manure.