A snake oil salesman has bamboozled the Wyoming State Senate into passing a bill to potentially pay his company a half a million dollars to “study” the economic benefits of transferring federal public lands in Wyoming to the state.

Senate File 110 was handcrafted by Ken Ivory, a former Utah state legislator and founder of the American Lands Council, whose mission is to promote the transfer of federal public lands to state ownership. In 2012, Ivory sponsored the “Transfer of Public Lands Act” in the Utah Legislature to demand such a transfer take place.

Ivory visited Cheyenne at the start of the Wyoming Legislature’s 2020 budget session to distribute handouts and talking points to lawmakers in support of his new proposal. SF-110 would have the state of Wyoming purchase software to analyze how much more money the state would receive if it owned the federal lands within its borders. 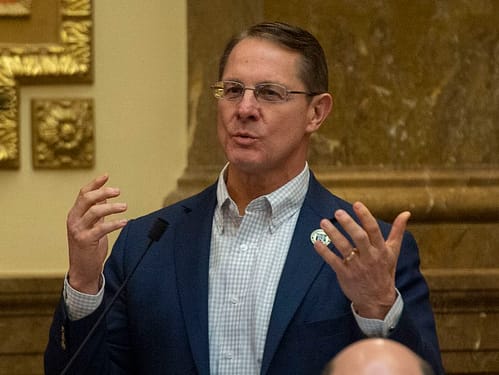 The kicker is that Ivory currently works for Aeon AI, the software company that’s lined up to receive the $500,000 government contract. So with the help of the Wyoming Legislature, Ivory would get to advance his public land transfer agenda and enrich himself, too.

This isn’t a new strategy for Ivory. Prior to resigning from the Utah Legislature in 2019, Ivory helped convince a committee to award $700,000 for a similar contract to Geomancer, a sibling tech firm to Aeon AI. Then Ivory went and got a job at Geomancer.

As SF-110 moves to the House this week, Wyoming lawmakers have the chance to not allow Ivory to get away with the same tricks twice.

The argument at the heart of SF-110 deals with what are called “PILT” payments, or “Payments In Lieu of Taxes.”

In the 1970s, the federal government agreed to make regular payments to rural counties that have lots of untaxable federal land and not much of a tax base. PILT payments are meant to help these communities support fire and police departments, water and sewer systems, and other basic public infrastructure.

Land transfer advocates like Ivory argue that the federal government should transfer ownership of public lands to the states so the states could collect more money. If the state owned the land, it could lease it for things like grazing or mining or sell it for development and collect property taxes.

This is an attractive prospect to some lawmakers looking for an easy way to fix Wyoming’s budget crisis.

The software sold by Aeon AI would allow state officials to examine each parcel of current federal land in Wyoming, predict its value if it were leased or sold by the state, and compare that sum to the amount that counties are currently receiving in PILT payments.

The difference in value is sizeable, at least on paper. According to Ivory’s handouts, Wyoming’s land breakdown includes roughly 43 percent private lands and 47 percent federal public lands. The handouts say that the state generates as much revenue in 10 days from property taxes on private land as it does in a year from PILT payments for the federal land.

During a presentation to the Wyoming County Commissioners Association prior to the 2020 legislative session, Ivory said the idea behind pointing out this discrepancy is to shame the federal government into increasing PILT payments.

Or—just maybe—the feds will realize their grave error in holding onto the land, acknowledge they can never pay what the land is truly worth, and simply hand it over to the states.

During debate on the Senate floor last week over SF-110, several legislators pointed out glaring problems with Ivory’s logic.

Sen. Bill Landen (R-Casper) said that lots of high-level people have been working for decades to increase the amount Western states receive in PILT payments, to no avail. These include U.S. Senator Mike Enzi, who has made it one of his signature issues.

“If we spend half a million dollars [on this software], where do we go from there?” Landen asked.

Sen. Charlie Scott (R-Casper) wondered aloud what the break-even point would be with the Legislation—in other words, how much would Wyoming’s PILT payments have to increase in order to cover the $500,000 cost of the software?

“I’m sure if we said we need more money they’d send us a check right away.”

After doing some back-of-the-napkin math, Scott concluded they would have to increase by 1.67 percent.

Sen. Cale Case (R-Lander) said he would be amazed if the software’s findings made any difference at all to the federal government.

“I’m sure if we said we need more money they’d send us a check right away,” Case scoffed.

Wyoming residents have been fighting public land transfer efforts since at least 2016. That year, the state released a report commissioned by the Legislature examining the possibilities of the state taking over ownership or management of federal public lands.

The report—which included a lengthy section on PILT—concluded that public land transfer wouldn’t be economically feasible for Wyoming. Nevertheless, a group of legislators proposed a constitutional amendment that would have laid the groundwork for public land transfer in Wyoming.

Sportsmen’s and conservation groups organized into a coalition that helped raise awareness of the problems with public land transfer—namely, that the state would sell or lease the land and remove public access—and rallied together to fight the proposal. They won.

Last week, many of these groups once again sounded the alarm and tried to defeat SF-110 in the Senate.

“I’m getting a lot of emails from hunters, fisherman, outdoors folks” against the bill, Sen. Wendy Schuler (R-Evanston) told her colleagues on the Senate floor.

Expanding Medicaid would drive down people’s healthcare costs across Wyoming