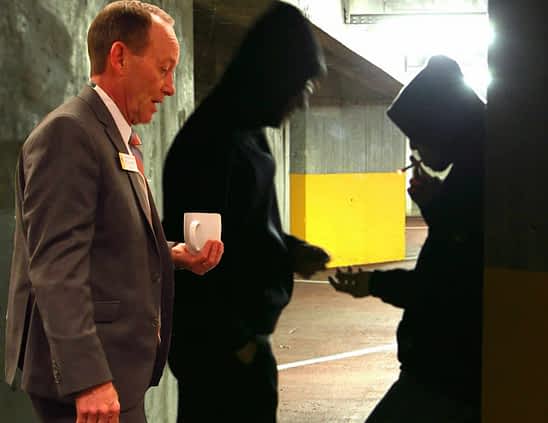 Somewhere deep in the bowels of the Jonah Building, Sen. Landen makes a sketchy deal.

The Jonah Building was abuzz Wednesday afternoon with news that a high-profile bill to ban “crossover voting” in primary elections had, after being killed the day before, arisen from the grave to live again.

On Tuesday morning, the Senate Corporations Committee declined to pass Senate File 32 on a 3 – 2 vote. Preventing people from being able to switch political parties at the polls to vote in the primary of their choosing is the state GOP’s number one priority for the 2019 legislative session. The Senate committee heard testimony on the bill over the course of two days, with prominent members of the state Republican Party, legislators, and lobbyists speaking on its behalf. 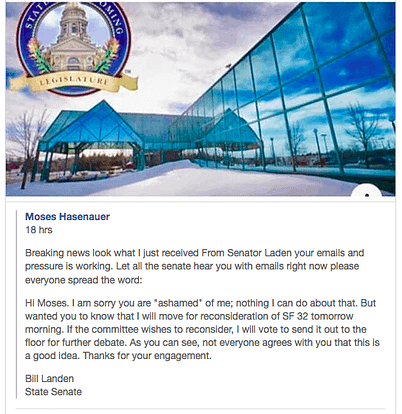 But a day later, Landen had changed his mind. He would bring the bill back for reconsideration. The news sent lobbyists, journalists, and advocates scrambling.

“Hi Moses. I am sorry you are ‘ashamed’ of me; nothing I can do about that. But wanted you to know that I will move for reconsideration of SF 32 tomorrow morning. If the committee wishes to reconsider, I will vote to send it out to the floor for further debate. As you can see, not everyone agrees with you that this is a good idea. Thanks for your engagement.”

This email exchange casts a tiny bit of light on what’s a common occurrence at the Legislature: powerful party members, donors, lobbyists, and other influence peddlers working behind the scenes to determine the outcome of legislation. They work hard to pressure lawmakers to shun normal protocol in their favor.

It’s hard to imagine that angry emails from Hasenauer and his friends tipped the scales in this case by themselves—did Landen receive a phone call from Foster Friess, the person most aggrieved in his gubernatorial loss by the so-called practice of “party raiding”? He was a main supporter of SF-32.

“I think the old legislative saying, ‘If you see a snake, kill it,’ applies here.”

Whatever happened, it didn’t matter this time—Sen. Tara Nethercott (R-Cheyenne), who had voted in favor of the bill on Tuesday, changed her mind, too. On Thursday, she voted against Landen’s motion to reconsider the bill, along with Sens. Charlie Scott (R-Casper) and Cale Case (R-Lander).

“I think the old legislative saying, ‘If you see a snake, kill it,’ applies here,” Scott said before the re-vote.

Another bill to ban “crossover voting,” House Bill 106, will be heard in the House Corporations Committee early next week.

Back-channel switch-a-roos don’t always end so quietly. A very similar situation took place last year, during the 2018 session, when a controversial bill to ban pipeline protests like those at Standing Rock unexpectedly died in committee.

The bill had powerful backers from law enforcement, the oil and gas industry, and the legislature’s far-right bloc. When the House Minerals Committee voted to kill it, oil and gas lobbyists took committee member Bill Henderson (R-Cheyenne) aside, explained to him that he had voted the wrong way, and convinced the committee to reconsider the bill. It passed with Henderson’s vote, and eventually won approval from the full Legislature.

Then-Gov. Matt Mead vetoed the bill, but another version of it has reappeared this year.

Send abortion bills to the farm

Bills often live and die according to the committees that hear them. If a bill has powerful backers, they can persuade legislative leadership to assign it to a friendly committee.

This can also involve shady tactics that violate procedural norms and good governance.

For instance, in 2017, then-Senate President Eli Bebout (R-Riverton) assigned two anti-abortion bills to the Senate Agriculture Committee, which normally oversees things having to do with farming and livestock. Bills to restrict Wyoming women’s reproductive rights had been having trouble getting past the Senate Health Committee, which would typically consider such proposals.

The highly conservative, all-male Senate Agriculture Committee, however, enthusiastically endorsed the measures. They went on to become the first two anti-abortion bills passed in Wyoming since 1989.

Despite powerful lawmakers’ best efforts to steer bills through friendly committees, it doesn’t always work out.

Last year, Bebout co-sponsored a constitutional amendment to dramatically cut Wyoming public school funding. He assigned it at first to the Senate Education Committee. But when he learned he didn’t have the votes there to pass it, he pulled it back and reassigned it to Senate Revenue Committee, which he knew would move it forward.

The bill passed that committee and the full Senate, but died when it reached the House.

This year, nearly 30 lawmakers signed on to sponsor a bill that would ban gun-free zones in Wyoming schools and other public places. It had strong support, but Senate President Drew Perkins (R-Casper) assigned Senate File 75 to the Senate Judiciary Committee, where three of the five members were predicable “no” votes on crazy-ass gun bills.

Anticipating defeat, one of the bill’s sponsors, Sen. Brian Boner (R-Douglas), apparently “threw a fit,” according to people who witnessed the event, and convinced President Perkins to move the bill to—wait for it—the Senate Agriculture Committee.

This time, however, procedure prevailed.

Just as Perkins was about to announce on the Senate floor his decision to reassign the bill, Sen. Chris Rothfuss (D-Laramie) pointed out that, according to Senate rules, the body as a whole was supposed to vote on any committee reassignments.

This is not a rule that the Senate had been following (see the previous example with Bebout’s amendment). But sure enough, Rothfuss was right. The Senate voted, and when Perkins counted hands, Boner and his co-sponsors were one short.

The bill went to Senate Judiciary after all, where—just as Boner feared—it died on Wednesday with a 3 – 2 vote.